After about three years of using my Netlify Public Folder, I’m here to give an update.

Given how fast technology moves, it’s probably no surprise to hear that the tech stack of my original solution is already falling out of date. I have:

BitBar has since been “rebooted” and is now called xbar (there’s also an alternative called SwiftBar). Additionally, the Netlify node.js client (at the time of this writing) is on major version 11. However, some of the functionality I was using in my custom script was pegged to APIs deprecated back around versions 3 or 4 (so I’ve been using an old version of the Netlify node.js client 🤫).

Relatedly, I’ve been playing with some of the more integrated automation features of macOS available in the Shortcuts app. In doing so, the thought hit me: why not simply my Netlify Public Folder stack? After years of usage, what I really want is a quickly-accessible button in the menubar which fires off syncing my local folder to Netlify’s CDN — and that’s it.

In light of these new, simplified needs, the thought hit me: why not create a macOS shortcut that runs a shell script and does the sync? That would simplify my tech stack down to:

And macOS shortcuts already has the ability to pin shortcuts for quick availability and execution in the menu bar.

You can even sit and watch your Shortcut run to completion if you want.

The beauty is, the Netlify CLI tool has a deploy command, so syncing a local folder to a remote site is a one-liner (or multiple lines for readability’s sake). Here’s what my deploy command looks like (sensitive info removed):

You can take that command, create a new Shortcut in macOS, add an action to run a shell script, paste the command in the script box, and boom! You’ve got a macOS Shortcut you can run to sync a local folder to a public-facing site on Netlify’s CDN. 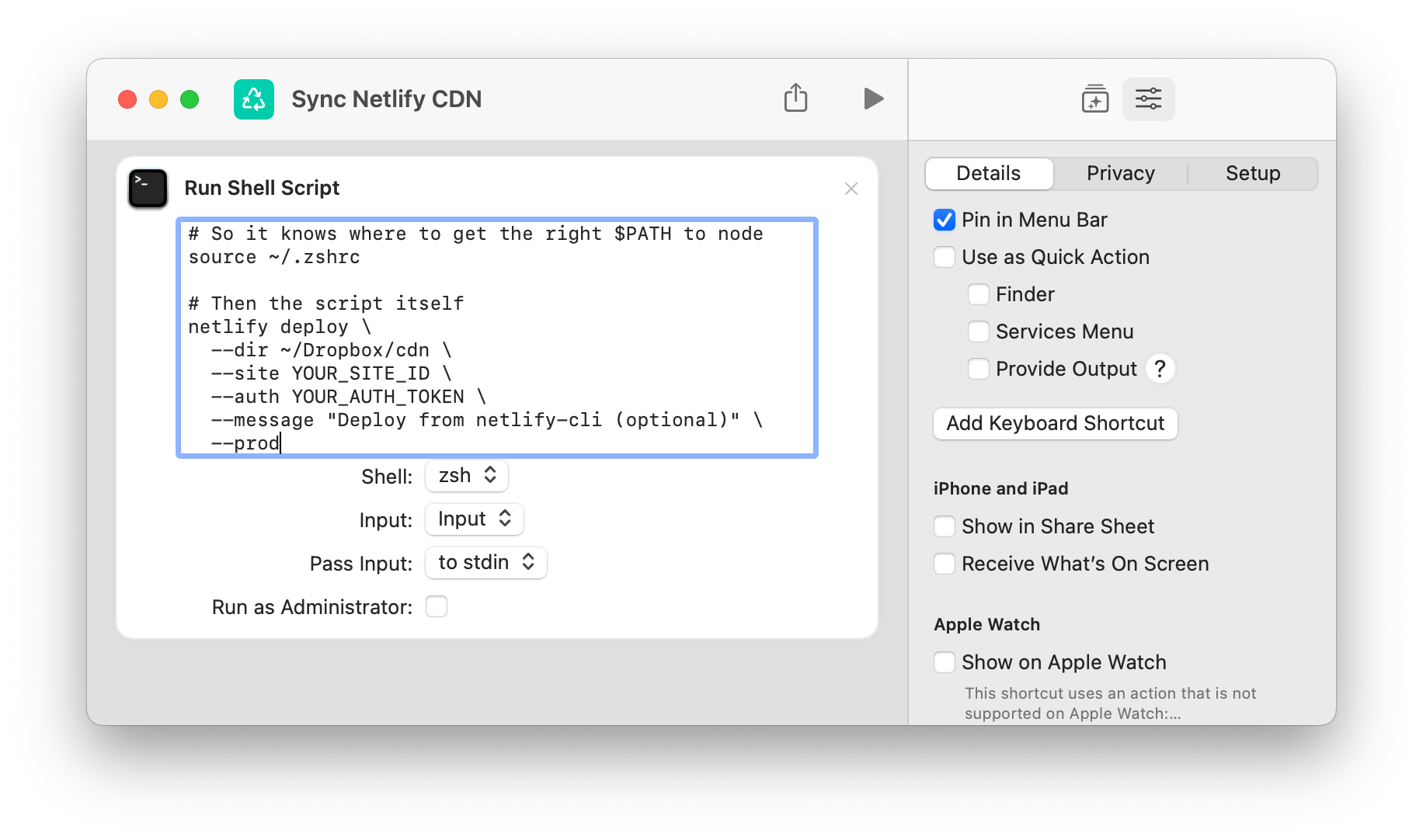 Of note: the shell run by Shortcuts has to know where to find the netlify executable (as well as the node executable it depends on), so you have to make sure that info is in your $PATH variable (I think I explained this right, but smarter people than me helped me figure it out — if you’re a shell expert, you probably know what you’re doing).

I really like where I am now with this script. Fewer dependencies to maintain over time but an equivalent solution for my needs.

Three cheers for my Netlify Public Folder: sync a local folder of files to a global CDN with two clicks! Hip, hip, hooray!