tldr: if you’re using react-dom/server to render a large number of static files and you’re seeing a significant degradation in performance, setting NODE_ENV to production could significantly improve your situation (this was true at the time of this writing—React 16.8.3).

I recently made a “under-the-hood” change for my icon gallery sites: I switched from using EJS templates to JSX (React) templates (the details behind this really deserve their own post...I’ll have to do that later).

Switching to JSX is something I’ve been wanting to do for a while. I wanted to leverage JSX when I first setup metalsmith as my static site generator, but using JSX for templating didn’t seem to have a lot of buzz in the metalsmith community and I couldn’t piece together enough disparate pieces of information to get it working. EJS, meanwhile, was mentioned in the metalsmith docs as a viable templating language and had lots of Google-able docs and troubleshooting information, so I went with that because I could get it working. I love the expressiveness of JSX when doing templating because I can “just write JavaScript”, but EJS let me write JavaScript too, so I was happy with it. At least at that moment.

As I got more familiar with how metalsmith worked, my brain began to understand how I could put the pieces together to leverage JSX for templating. So I took the plunge. Once I had it all configured, I found myself running into a strange performance issue.

You see, at first, I didn’t notice the templating system being slow. As I was translating EJS to JSX, I was running my builds on my local development server with a limited number of posts. My static site, iosicongallery, has over 1,300 icons (posts) in it and I didn’t need to be generating every single one of those as I fleshed out my templates. So I’d limit the total number of posts being rendered to like 60. This made the iterative feedback loop really fast: make changes, build runs, browser refreshes with latest updates to the templates. Once I got all my templates up and running, I ran my full site build a couple times, just to make sure things were working, and everything worked just fine. In fact, I ran the build in my new JSX branch, then ran it in the old EJS branch, and the build leveraging JSX for templating was ~25% faster than the build leveraging EJS. Cool! So everything’s fine and dandy right?

Not quite. As mentioned, when I was doing local development, I usually set a limit on the number of posts the site was building, just because I didn’t need to build the entire site to make sure my templates were working.

To run a production build of my site, I was doing this:

This was setting NODE_ENV to production and rendering the entire site, which consisted of over 1,300 individual icon pages. When doing a production build, it wasn’t slow. But I discovered that if I ran my local development server without a posts limit, things got really slow. How slow? At first, it felt like my entire build was just stalling. I would type npm start and a minute later, my local development server still wasn’t up and running.

So I started troubleshooting. My build log gave me a rough idea where the bottleneck was happening, so I was quickly able to diagnose the issue as the spot where I was calling ReactDOMServer.renderToStaticMarkup() to render the individual page views for each icon. 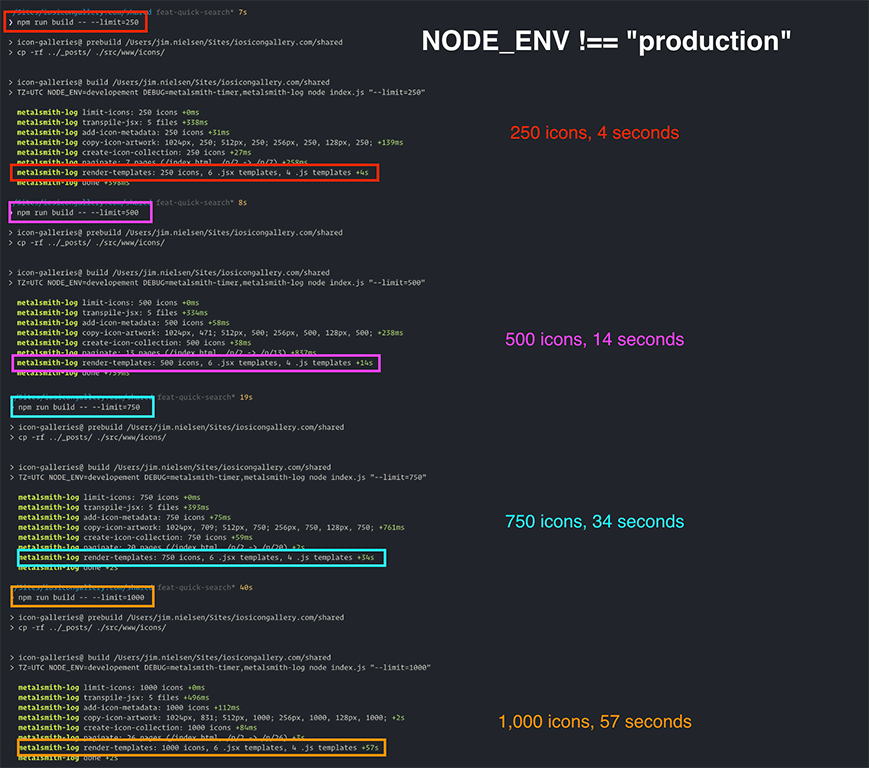 You can see how, as I increased the number of individual icon pages being rendered, the build got slower and slower. The strange thing was, this wasn’t happening with the production build. It was nice and quick. So why was my development version running slow? The npm start and build commands were running the same underlying build command, just with a few environmental configurations, i.e.

So I Google’d keywords around “react dom server rendering NODE_ENV production”. Turns out, setting NODE_ENV=production has drastic speed implications when running react-dom server and rendering to a string.

By setting NODE_ENV=production, there is a 400% performance improvement

I’ve been using React for years and I didn’t know this was a thing. It’s likely there are other people out there like me, hence this blog post.

So how much faster was it to set NODE_ENV to production? Well, these were my results: 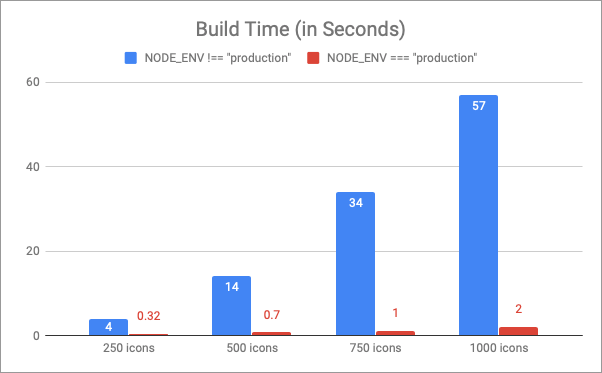 Moral of the story: if you’re rendering JSX on the server and seeing performance issues, your problems could very well be solved setting NODE_ENV to production. Granted running in development mode has its benefits. React can possibly catch a lot of errors for you. Just know that if it seems incredibly slow, I guess that’s a known thing and it’s not your fault.