Via a retweet by Sara, I saw Dan Mall ask on Twitter:

Does anyone still validate their HTML?

To bluntly answer the question: I validate, but only when I encounter a perplexing cross-browser issue I can’t seem to solve.

In those cases, I’ll copy the one-off HTML document I’m dealing with and paste it into the W3C’s browser-based markup validation service to check for any errors I can’t seem to spot.

While that service is useful for manually validating individual documents, it’s not particularly practical for systematically validating HTML as part of an automated software development pipeline.

That said, a while back I discovered the W3C Nu HTML Checker which also validates HTML. It has a HTTP API which you can leverage to automate the process of validating multiple HTML documents.

I wrote a little script to interface with the API and check the HTML files output by my static site generator, but it kept returning 503 errors on many of the files. 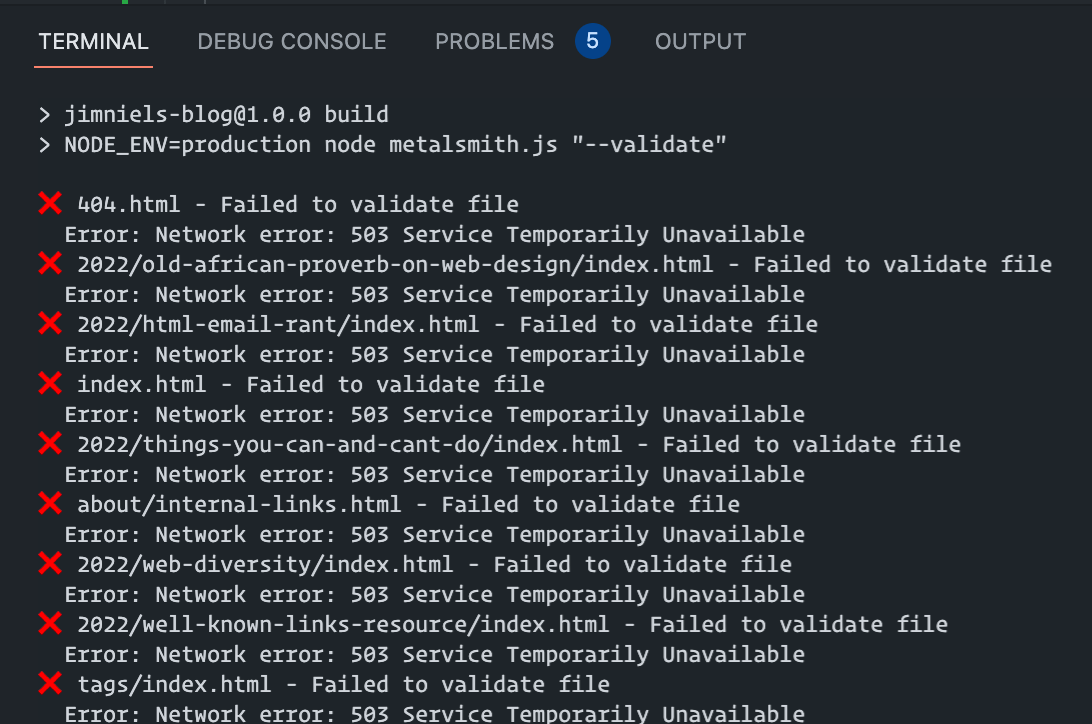 I searched npm for a solution and, while I found many options, they all had one of the following self-imposed dealbreakers:

But did I give up? No. I went to Twitter:

What are people using to batch validate files? e.g. run your SSG, then feed all your **/*.html files to some service that’ll validate your markup? I was using nu validator but getting lots of 503 errors when I do

I wasn’t necessarily expecting a service. I’d be more than happy with a CLI tool I could run locally as long as it didn’t require installing Java to do it.

Then, courtesy of @ffoodd_fr, I found html-vadliate. A cursory glance at the docs as well as the commit history on GitHub and I concluded this was the tool I was looking for.

I watched the video from FOSDEM 2021 “HTML5 validation with HTML-validate” and it was quite intriguing. Can you spot the validation error here?

If not, watch the video (this part starts at ~4:15). It’s an intriguing look at what the HTML parser does based on the spec.

Now, I like to think I write pretty good HTML. And I haven’t found any bugs in my blog, which is pretty simple site, so my HTML is probably free of problems — right?

I ran html-validate with the recommended preset and it resulted in over 14,000 errors. That’s right: fourteen thousand.

A lot of those errors appeared to stem from rules like no-trailing-whitespace which, if you look at the rule on html-validate, is really designed for validating source files to help keep a clean git history. Meanwhile I was running the validator on generated files, so the rule seemed less applicable. These are the kinds of rules I could save for another day.

To keep things manageable, I switched to the standard present — which is supposed to be like the Nu HTML Checker, I can live with that as a starting place — and I trimmed down my problems to one thousand five hundred and twenty.

Now not all of those were errors I wrote. Some were a result of markup generated by other tools, like embedded SVGs.

Others were, however, errors I wrote. In my defense, because I wrote them in one place (e.g. a template) they ended up across many of my HTML files. So a single error in one template resulted in the validator counting it as 300 problems across 300 files. (At this point, I’m just making excuses for myself.)

Anyhow, I figured I would outline the validation errors I encountered as an exercise for myself in saying: you don’t know HTML as well as you thought, Jim.

Turns out, I still make lots of errors when marking up my hypertext documents. The HTML parser is so good at skipping over problems that I never discovered through my testing that these issues existed. That’s a pretty wonderful thing, but I also see how it led me to being lazy.

Having a validator really helped me stay on point in writing my markup. I give the html-validator CLI tool two big thumbs up 👍👍! Maybe I'll get to their recommended presets one day and fix the other ~10,000 problems in my markup.