You know, it wasn't that long ago. There was RSS. There were blogs...Now? [Social media sites] control what gets amplified and what gets monetized. A few conference rooms in Silicon Valley dictate our online culture.

What I actually really loved about this site and found rather witty and novel was how it appeared when linked to in my twitter feed: 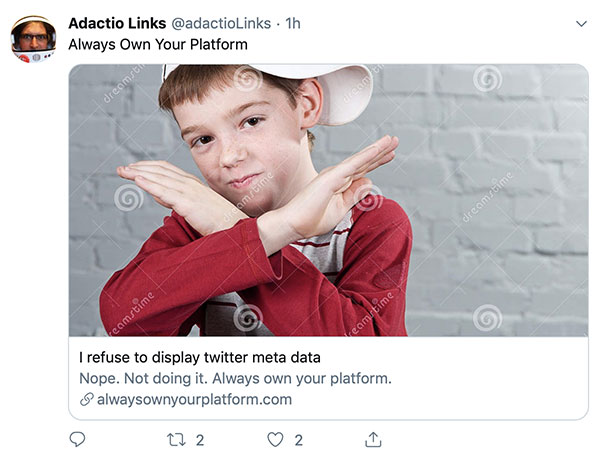 I found the anarchist, "freedom fighter" approach to this site’s open graph metadata rather novel and amusing.

Talk: “Webhooks and Events and Microservices, oh my!” from Phil Hawksworth

Phil once heard someone say, “I wouldn’t use a minimum viable parachute” to which he responds “I would if I was in a situation where I needed a parachute”. His point being:

MVP is not choosing a weak product over a good product. MVP is choosing to have something now and something better later.

Article: “Going Offline—the talk of the book” by Jeremy Keith

Jeremy discusses some of his strategy around presenting code when your audience is more than just developers (or even code beginners):

I think this is an excellent strategy for making code less overwhelming to people who would otherwise be unfamiliar with it.

Article: “Maybe the web should die” by Paul Miller

I click Buzzfeed links and Verge links and Awl links and Polygon links for the same reason anybody does: there's a hole in my heart, and I hope 300-400 words of web content will fill it

wouldn't it be nice to live in a world where I never have to read something that was written for the sole purpose of traffic and revenue?

More than half the time when I'm at Buzzfeed and The Verge (I keep using Buzzfeed and The Verge as examples because I visit them a lot apparently), I get the distinct feeling that this publication has “no special interest in publishing beyond value extraction through advertising”. And if that’s the case, then it’s really important that I, as a human being with presumably better things to do, should avoid publications that make me feel this way.

online publications seem to have coalesced around the worst elements: huge ads, disposable content, auto-play videos, Like and Tweet buttons which follow you around the internet, hidden embedded pixels that try and guess your eye color so they can sell you shampoo more effectively.

The reason there’s no solid revenue alternative to advertising for most of these websites is that most of what they put out is junkfood clickbait designed to increase revenue through ads. They can’t monetize it because it’s worthless. Is that ironic?