One of the problems I encountered at my new job was that nobody knew how styles were compiled for one of our applications. Looking at the code base, I could glean the following Ruby dependencies were required in order to compile all .scss files:

Doing a bundle install and trying to run Sass didn’t work. After an exercise in futility of trying to get the styles to compile (and seeing how nobody in the org knew how it worked) I decided to refactor the styles compilation process.

After some initial research, it was clear that two of the style dependencies were completely unnecessary (and part of the problem). The day the project was initially setup, Compass was likely needed. However, since that day nobody seems to have questioned its inclusion. Since that initial setup, browser support for CSS3 rules has improved drastically and our own business requirements for browser support no longer dictated we needed to support legacy browsers via a helper like Compass. Additionally, I discovered that Susy was a dependency included in the project but rarely used. It would be easiest to simply remove it.

These insights made me formulate the following goals:

It seemed even more logical to remove Compass and Susy because the dependeices themselves were quite old:

From analyzing the code, I gathered that the primary usage of Compass in the application had been for prefixing CSS3 properties. As those were no longer needed, I made a list of all the Compass mixins that would need to be replaced and their corresponding CSS counterparts:

The find/replace pattern for these rules was pretty straightforward since Compass mixins mapped straightforwardly to CSS properties and their parameters were simply valid CSS values. So all I needed to do was extract the CSS value from the mixin call and drop it into the corresponding CSS property, i.e.

Using regex101, I devised a regex that would allow me to search all .scss files for occurences of the Compass mixins I wanted to replace. I came up with the following regex:

This regex searches for the specified Compass mixin, creates a grouping around the parameter value(s), and then selects up until the end of the line (\);). In doing a find and replace, this would give me the entire line to work with and provide me with the mixin’s CSS value in a grouping. 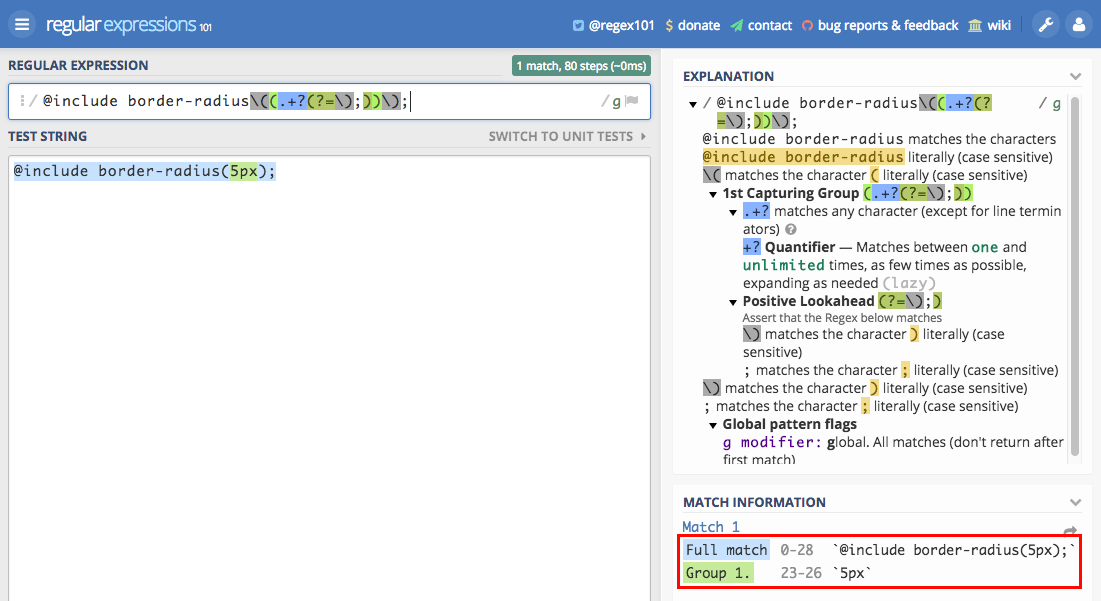 Having a regex for each property, I could then run a find and replace for all *.scss files using my text editor Sublime. For each Compass mixin, I would swap out the beginning part of the regex with the mixin name I was trying to find (i.e. @include border-radius\( for finding and replacing Compass’ border-radius() mixin, @include box-shadow\( for finding and replacing Compass’ box-shadow() mixin, etc). Everything else about the regex could stay the same.

For each of these mixin regexes, I used Sublime to do all the legwork, i.e.

Generally I would test out the regex on one file first, just to make sure it was finding/replacing the correct values. Once confirmed, I’d run it for all *.scss files. (Side note: Atom is pretty great at this because it will provide you an inline preview of what you're finding and replacing, taking a lot of the unsurety out of it, though I’ve found its ability to actually write changes to the found files hit or miss).

After running the regex, I would pull up the file diffs in the Github client and just make sure everything looked ok. If anything needed to be fixed or corrected, I’d do that part manually. 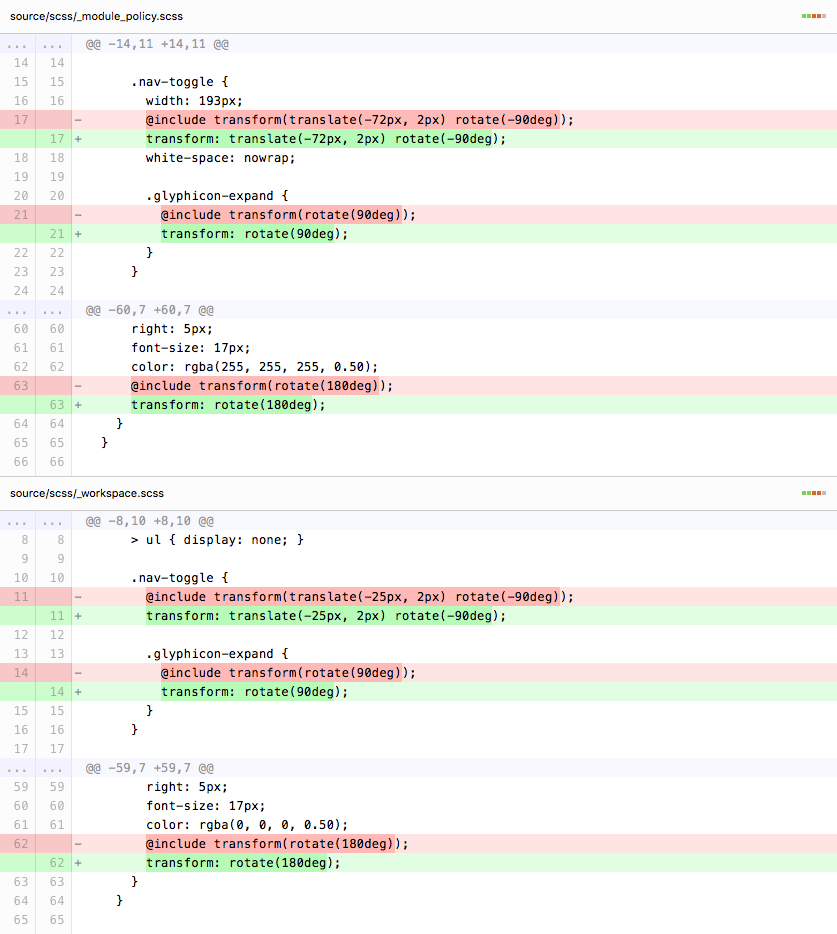 An example of where I had to fix things manually dealt with the background-image() mixin. There were a few occurences of an older syntax of linear-gradient() that had to have the direction top removed because that was the default browser value (this old syntax would fail in modern browsers).

Because Susy was only rarely used, I was able to find and replace most occurences manually. Compiling with Sass helped me discover which mixins were part of Susy because Sass would throw an error on them. I would then find and fix them until Sass eventually compiled without errors. Eureka!

After removing the Ruby dependencies of Compass and Susy, I took our application one more step and removed Ruby from the entire Sass compilation process by switching over to using node-sass via NPM. This was really easy: I ran npm install node-sass --save-dev, added a script to run the compilation in package.json, then ran npm run css:build. 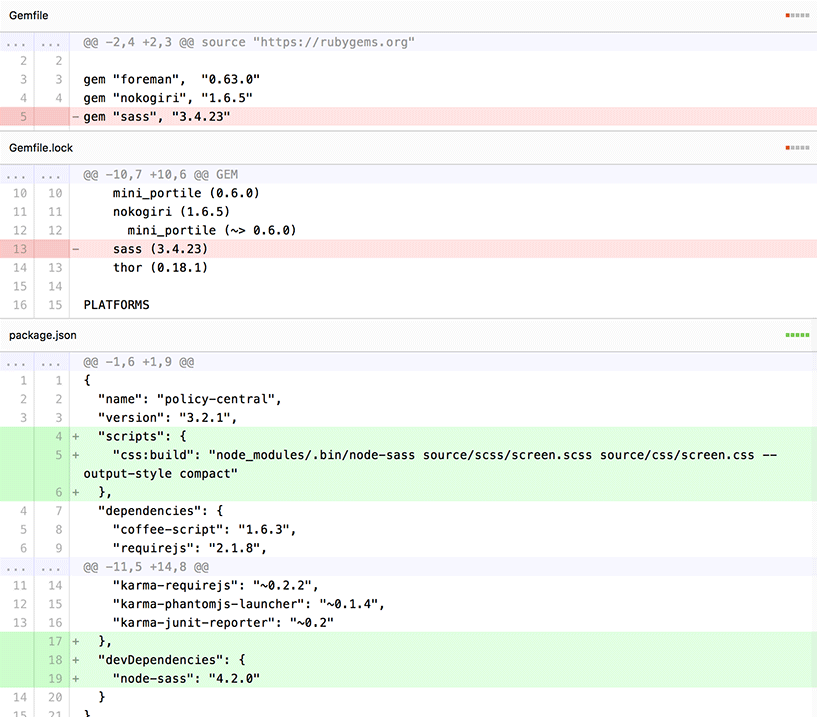 Gotta admit, this was kind of a fun little refactoring project. Feels really good to take another step towards a more modern, JS/Node front-end. The end goal is that every front-end dev can run npm run start and have their environment up and running. This work got us one step closer.