A great little piece of writing touching on the art of human relationships. It’s based on an experience Jeremy Keith had trying to persuade others about the importance accessibility:

If I really want to change someone’s mind, then I need to make the effort to first understand their mind. That’s going to be far more productive than declaring that my own mind is made up. After all, if I show no willingness to consider alternative viewpoints, why should they?

A very on-point lecture on the limitations and danger of the our digital mentality “collect everything and maybe we will use it later”.

One example the speaker touches on is the pharmaceuticals industry and how, because of the “big data” philosophy they bought into, they are now at a point of diminishing financial returns in new drug development:

This has been a bitter pill to swallow for the pharmacological industry. They bought in to the idea of big data very early on. The growing fear is that the data-driven approach is inherently a poor fit for life science. In the world of computers, we learn to avoid certain kinds of complexity, because they make our systems impossible to reason about.

Note that the speaker suggests that the diminishing returns result from the fact that computers need unambiguous rules in order to make sense of things. Thus, in order to create data models and make sense of the world, programmers have to throw out “certain kinds of complexity” which are inherently and naturally found in the realm of biological science. As the speaker states later on, “Nature is full of self-modifying, interlocking systems, with interdependent variables you can't isolate.”

Ultimately, what we are dealing with in our computer systems are humans and humans adapt. That means when you create a data model around a person, the model inevitably goes out the window because a person adapts and changes, not just naturally over time, but they also react and change according to the model that is enforced on them.

An example of how humans adapt to numerical requirements, as drawn from this transcript, is found in the anecdotal story of a nail factory. Once their was a nail factory. In the first year of their five year plan, the nail factory’s management evaluated employees by how many mails they could produce. As such, employees produced hundreds of millions of uselessly tiny nails. Seeing their mistakes, management changed their productions goals to measure nail weight rather than nail quantity. As a result, employees produced a single giant nail.

Perhaps this story seems unreal, but the speaker provides a less fictitious example of how humans adapt to the systems imposed on them and how that ultimately renders the collected data useless:

[An] example is electronic logging devices on trucks. These are intended to limit the hours people drive, but what do you do if you're caught ten miles from a motel? The device logs only once a minute, so if you accelerate to 45 mph, and then make sure to slow down under the 10 mph threshold right at the minute mark, you can go as far as you want. So we have these tired truckers staring at their phones, bunny-hopping down the freeway late at night. Of course there's an obvious technical countermeasure. You can start measuring once a second. Notice what you're doing, though. Now you're in an adversarial arms race with another human being that has nothing to do with measurement. It's become an issue of control, agency and power. You thought observing the driver’s behavior would get you closer to reality, but instead you've put another layer between you and what's really going on. These kinds of arms races are a symptom of data disease. We've seen them reach the point of absurdity in the online advertising industry, which unfortunately is also the economic cornerstone of the web. Advertisers have built a huge surveillance apparatus in the dream of perfect knowledge, only to find themselves in a hall of mirrors, where they can't tell who is real and who is fake.

Talk: The Internet With A Human Face

Love this assertion the speaker makes: very often data is just a mirror, it reflects whatever assumptions we bring to it.

The belief in Big Data turns out to be true, although in an unexpected way. If you collect enough data, you really can find anything you want. 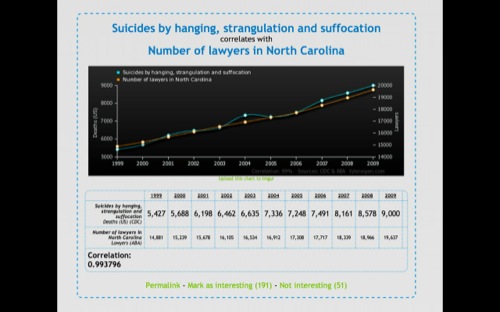 This is a graph from Tyler Vingen's lovely website, which been making the rounds lately. This one shows the relationship between suicides by hanging and the number of lawyers in North Carolina. There are lots of other examples to choose from. There's a 0.993 correlation here. You could publish it in an academic journal! Perhaps that process could be automated. You can even imagine stories that could account for that bump in the middle of the graph. Maybe there was a rope shortage for a few weeks? 'Big data' has this intoxicating effect. We start collecting it out of fear, but then it seduces us into thinking that it will give us power. In the end, it's just a mirror, reflecting whatever assumptions we approach it with. But collecting it drives this dynamic of relentless surveillance.

An overview of how Instagram has been engineered over the last five years. A few points stuck out to me.

Choose simple solutions and do not over engineer in order to future proof:

Our mantra, “Do the simple thing first” ... Since there were only two of us, we had to determine the fastest, simplest fix each time we faced a new challenge. If we had tried to future-proof everything we did, we might have been paralyzed by inaction. By determining the most important problems to solve, and choosing the simplest solution, we were able to support our exponential growth.

It takes an incredible amount of focus to do this, but

we often say “do fewer things better” inside Instagram

However, with that said, the author does state that this is not the answer all the time for everyone:

Doing the simple thing first doesn’t mean your solution will work forever. We’ve learned to be open to evolving our product...

Video: Building Without Nails: the Genius of Japanese Carpentry